All four Warrior tackle teams played in NCAFA’s region-wide championships this weekend. “It was a heck of a weekend for our players and Warrior families. It was an amazing two days and when it was all over, our Tykes and Mosquitos were crowned champions.” – Warrior President Paul Stewart

Tyke:  The Bell Warriors Tykes played the biggest game of the year and the defense pulled through to win the Chorney Conference Championship over a tough Nepean Redskins squad 14-12.  Led by  defensive players Max Johnston, Andrew Decarie and Shyreek Phillips, who made several key tackles throughout the game, all led by example and played through some minor injuries. Offensively,the Warriors team played confidently with James Lawlor and Trey O’Brien scoring the two Warrior TD’s on impressive runs. 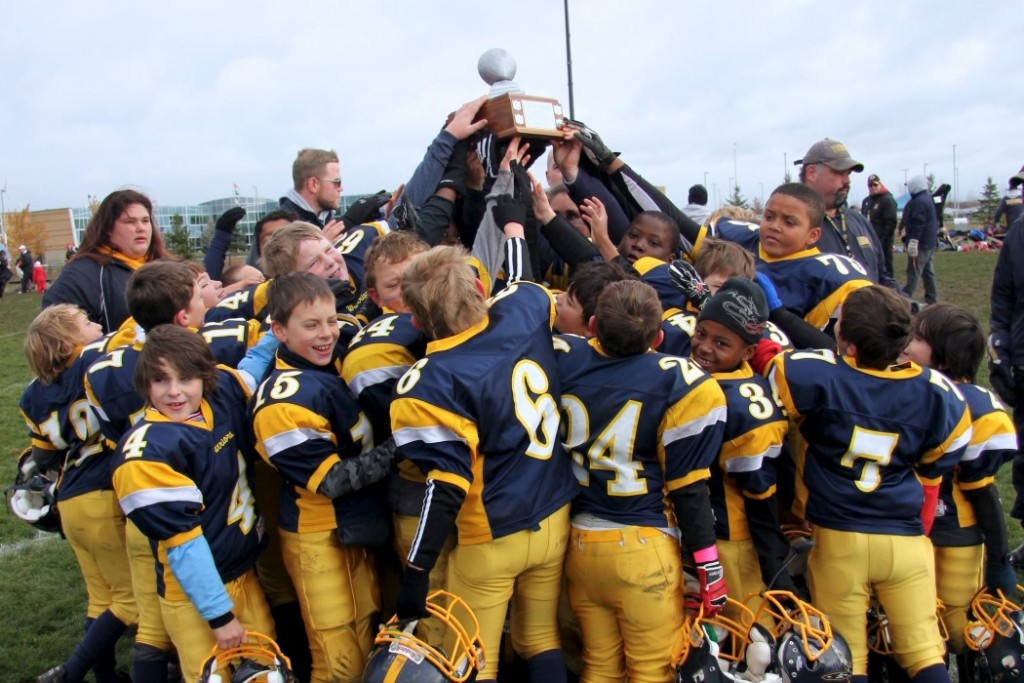 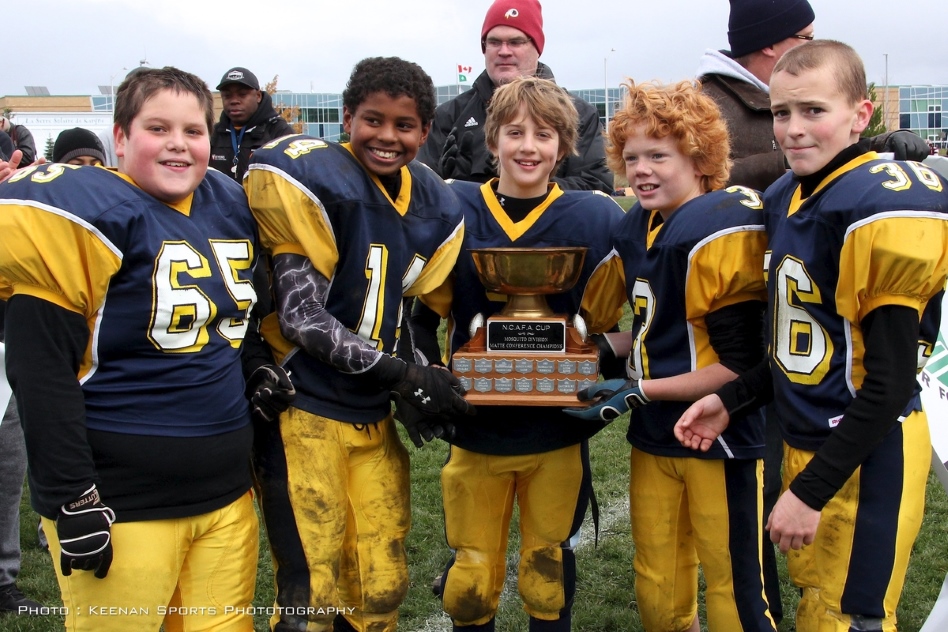 Mosquito:  The Bell Warriors mosquito squad held off a tough Bengals side to capture the Chorney Conference Championship Cup this past weekend at Millenium field, the fourth straight Mosquito Division City Championship.  Another multiple touchdown performance from Joshua Streng with strong performance at Quarterback from James Keenan. The defence was led once again by Malik Yusuf and Shane Forsyth. 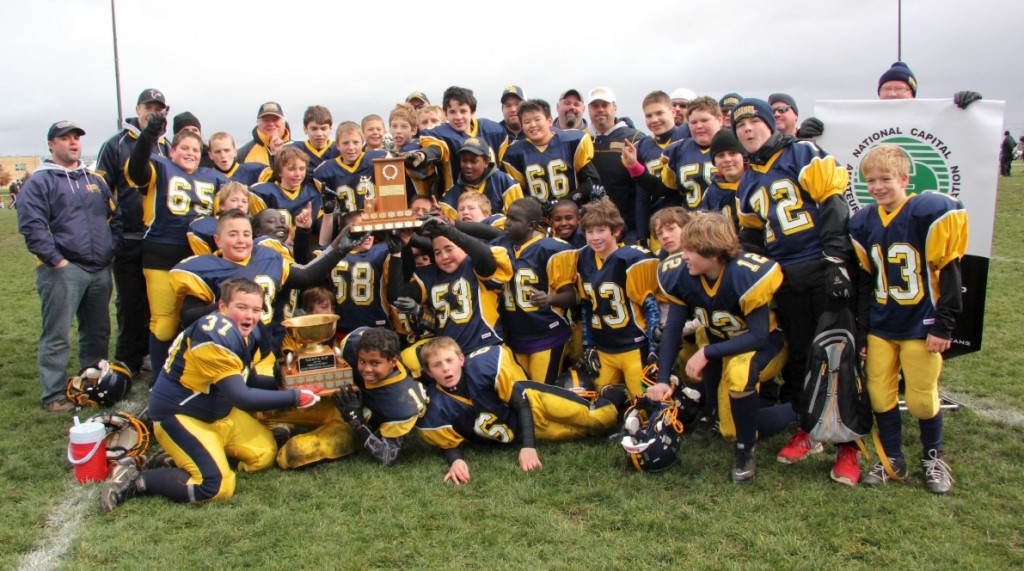 Pee Wee:  The Bell Warriors Peewee Team, in the third straight A-Cup appearance by the Warriors, fought hard against The North Gloucester Giants in a battle of the leagues 2 best offensive teams. Neither side giving in completely, bend but don’t break, the game needed OT to decide the outcome. The Giants prevailed 26 – 20 , with Dilan Parry (The MVP of the game ) amassing 266 yards rushing in a losing effort.

Bantam:  The Bell Warriors Bantam club just didn’t have enough to shut down the undefeated Myers Riders and came up short 40-2.  The Warriors Bantam Club had an impressive 7 an 1 season and won both their sudden-death playoff games to appear in the A-Cup Gilchrist Conference Championship.  As had been the case all season long, Mike Hoecht, Charlie Keenan and Jesse Skucas ran hard for the Warriors.  Defensively, Josh Bailey and Mitchell Henselwood led the Warriors throughout the game.

Combined, our 4 levels had the best record in the league this year.  We were #1 in the league for Points For (1205), #1 for Points Differential (+773 points), #4 for Points Against (432), #1 for Average Points Per Game (38) and all 4 levels can boast about winning seasons.  With all 4 clubs competing in the City’s Championship and our Tykes and Mosquitos winning, this has certainly been a banner year for the Warriors.

The Bell Warriors partner with Bel-Air at the Midget level (ages 17-19) and the team is called the Bel-Air Noresmen. 14 Ex-Warriors played for the Norsemen this year and they went on to win the A-Cup Midget Championship over the Nepean Redskins 4-3. 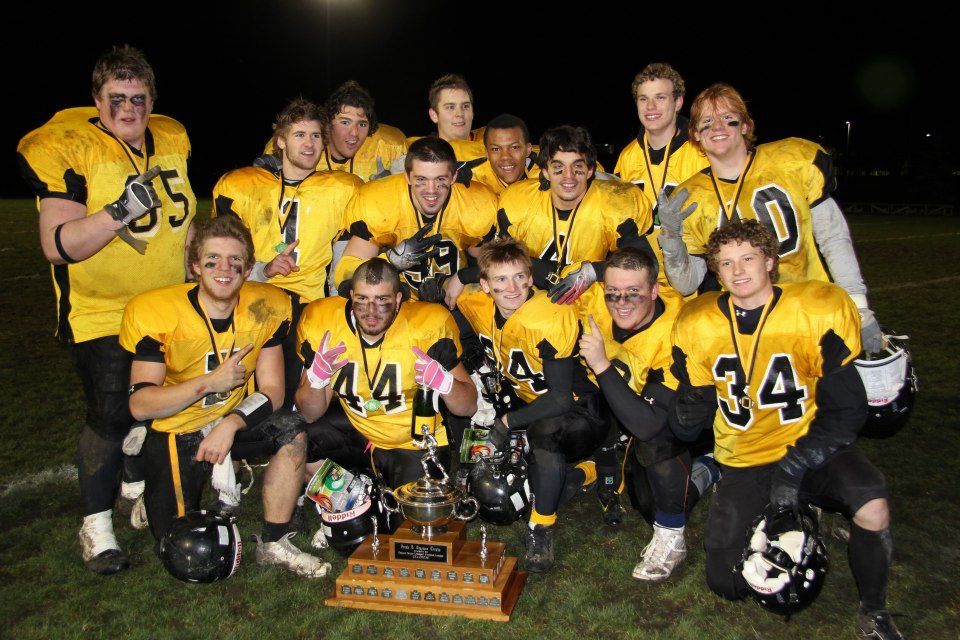