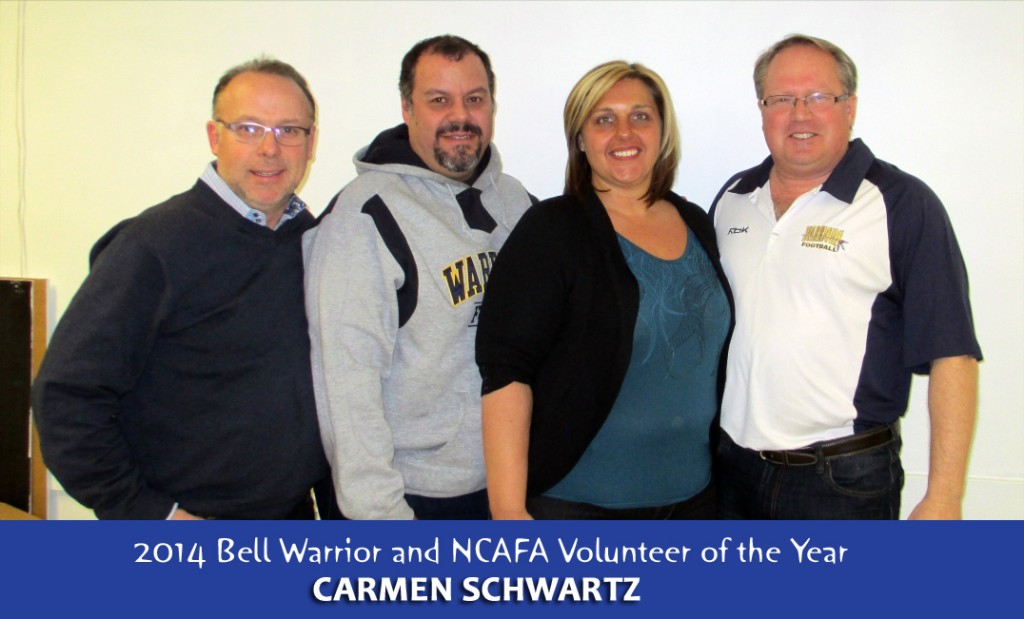 All four of the Bell Warriors Football Club’s 4 tackle program teams won their semi-final games this past weekend.  The Warriors Bantam team (15-16 years old) lost earlier in the season to the Kanata Knights but came out victorious Thursday night with a convincing 38-0 win.  This set up another opportunity to avenge a previous season loss to the South Ottawa Mustangs this coming Saturday, November 1.    “The  Mustangs were by far the better team that day.  They were a more determined team and we would expect no less in our Championship Final.  For our Warriors to come away successfully, we will have to play with more focus and desperation.  I’m sure the Mustangs will come into the game confident and our group will come out determined.  We played with a level of desperation in our semi-final win over the Kanata Knights 38-0 last week.  We had lost to the Knights earlier in the season as well so our coaches are hoping our boys learned what it takes to rebound and come to play.  At the beginning of the year, we had thought we would have a team that, if all went well, would compete with the best teams at Bantam.  We’ve had an odd number of unfortunate injuries that forced us to shuffle our line-ups virtually every week.  That hasn’t helped us.  We still have a couple of important veterans out but we’re hoping the extra playing time our backups have had this year will be to our advantage.  You never know for sure what’s going to happen and that’s why you play the game. I know one thing for sure.  When you play the Mustangs you can always expect a tough hard-hitting battle.”  Paul Stewart, Bell Warriors Bantam Head Coach and President

The Bell Warriors play in the largest amateur football league in Canada – the National Capital Amateur Football Association (NCAFA).  The NCAFA Championships will all be played at Minto Field starting tonight with the Tyke (ages 8-10) Sullivan Championship which will pit the Bell Warriors vs the East Ottawa Generals.  The Tykes won a thrilling come-from-behind 33-30 win Sunday night to earn their spot in the Championship.  The Warriors Bantams play Saturday vs the Mustangs which will be followed on Sunday by the Warriors Mosquito and Pee Wee Clubs.

“At the Mosquito level, 1st-time head coach Richard Baylin will be leading his undefeated Mosquito squad vs the undefeated Cumberland Panthers.  This came about due to a phenomenal double OT 28-22 win over a dynamic North Gloucester Giants team.  The final matchup of the best from the West facing the best from the East will be sure to be a thriller.  Following the Mosquito final, the Warriors Pee Wees will also be facing the Cumberland Panthers.  The Warriors Pee Wees will be led by aggressive defensive leaders Steven Schwartz (Nepean) and Malik Yusef (Stittsville) while offensively, QB James Keenan (Stittsville) will be steering a well-rounded offensive attack.  The speedy RB Andrew Fullerton (Stittsville) will be supported by WR’s Eric Conley (Nepean), Josh Streng (Carleton Place) and Nicholas Walter (Stittsville).  The Warriors are very proud of what we have accomplished this year and having all four of our teams competing in the Regional NCAFA Championships should make for one exciting week of football for our Warriors supporters, families and players”, concludes Paul Stewart.

In 1999, the Bell Warriors Football Club introduced a Post-Secondary Scholarship Program which is now known as the Bell Warriors Jim Wagdin Scholarship Program.  Jim Wagdin was a coach with the Bell Warriors for 24 years and retired from the club as President in 2012.  His commitment to the Warriors and his community reflect the values the Warriors want to reinforce in our players with this post-secondary scholarship program.  Every year since, the Warriors have given up to two $1,000 scholarships.  The three main selection criteria are Athletic experience, Academic achievement, and Community volunteerism.  This year’s two winners are two young men that were both stellar players with the Warriors:  Charlie Keenan and Mitchell Henselwood.  In all, the Warriors have given out $30,000 to ex-Warrior players in support of their scholastic goals and aspirations.  On and off the field, the Warriors stand by our players and believe in giving back to our community.

More details can be found on our Scholarship Page. 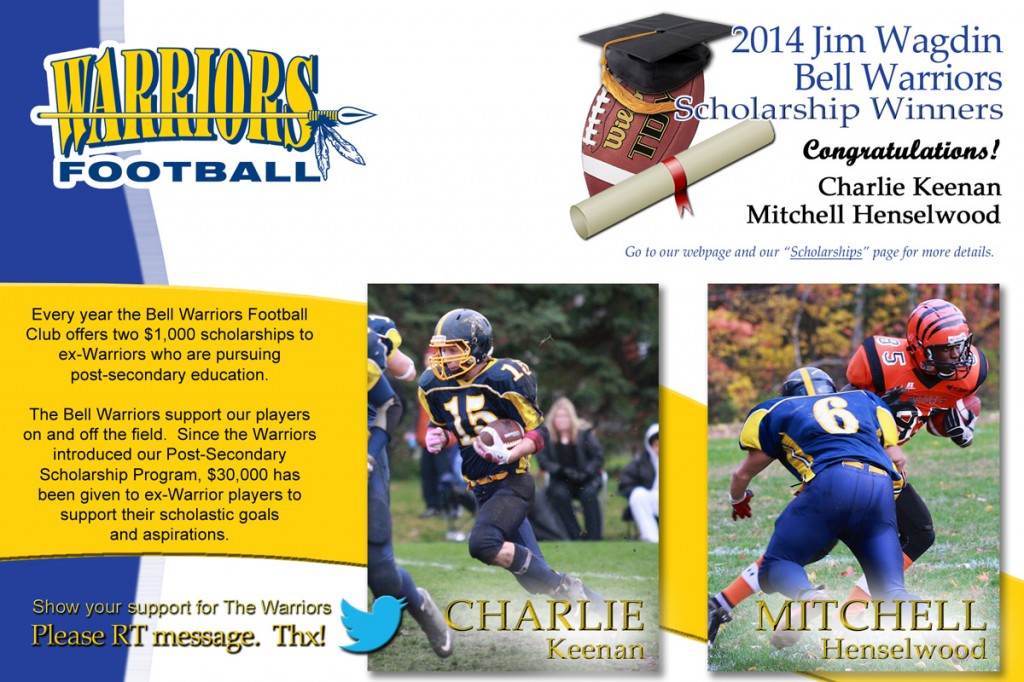