Some of our very best Warriors alumni have gone on to be trained by Pat & his EPA TEAM.  He not only gets them ready for the next level, he doesn’t forget where they started.  Pat donated a bag of cleats for our Cleat Exchange Program last night.  “We have a lot of young players that come from financially challenged families and they rely on our Cleat Exchange Program for their cleats each year.  To have someone like Pat step up and make such a generous donation means a lot to our Warriors players, families and our club”, observes Paul Stewart, Warriors President.

Pat’s list of accomplishments is too long to outline fully but here are some highlights: 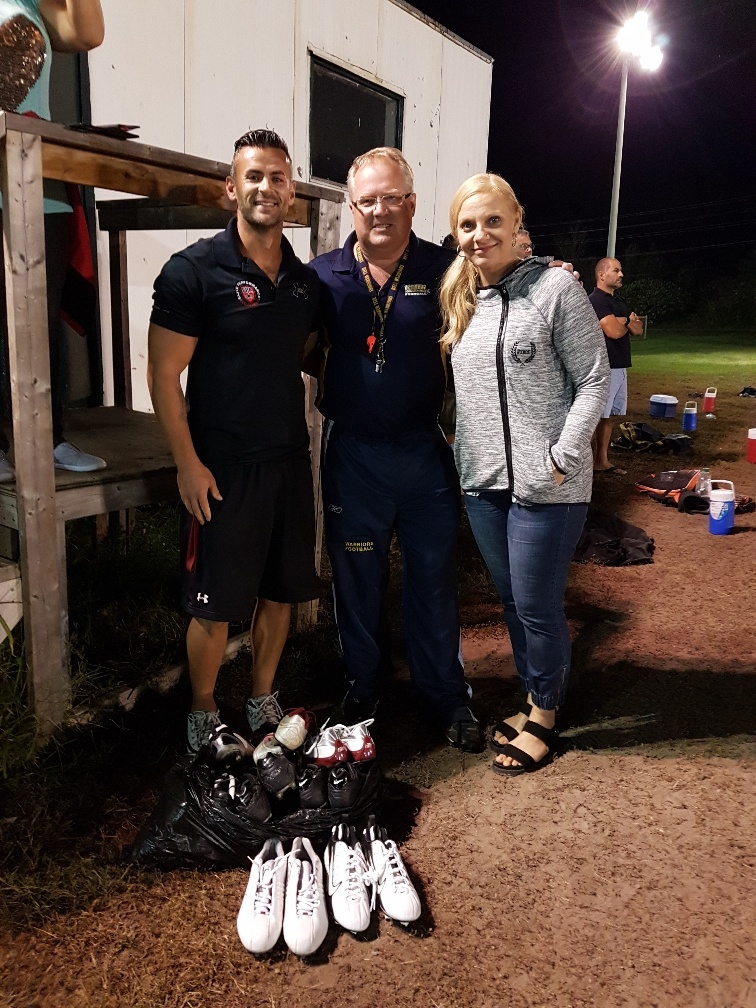 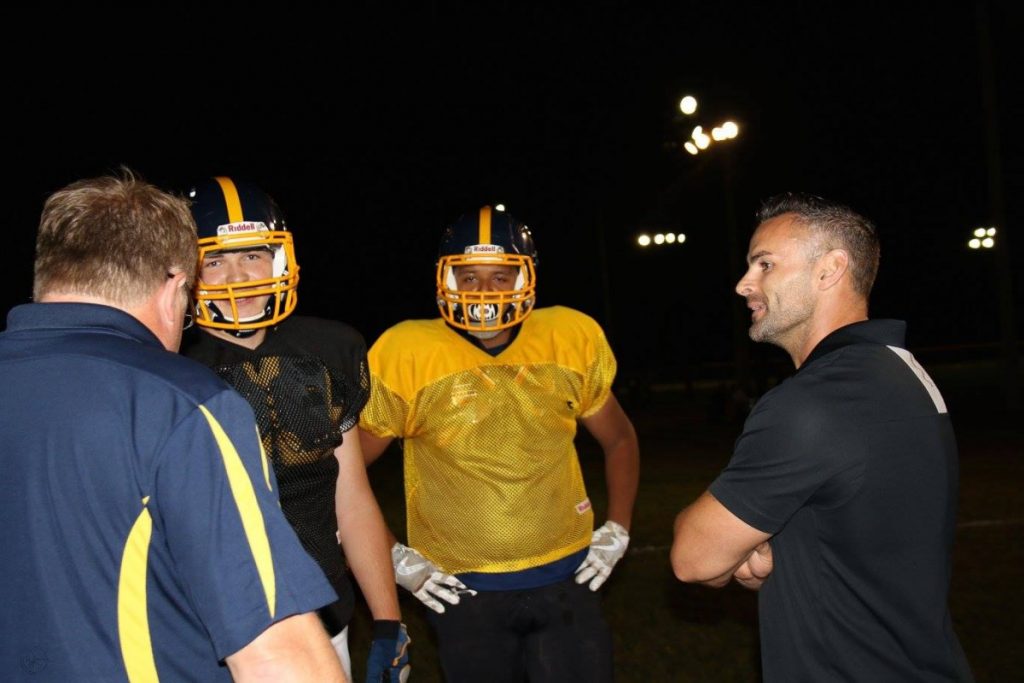 On behalf of the Warriors Family, THANK YOU Elite Performance Academy (EPA) and our friend Pat Woodcock, our newest PLAY BALL SPONSOR! 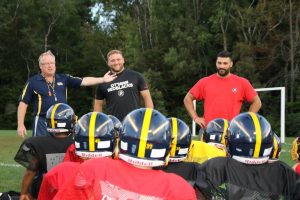 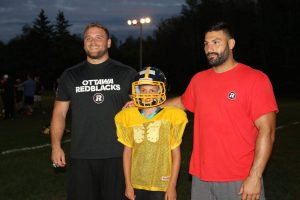 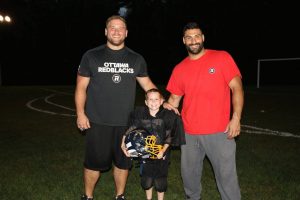 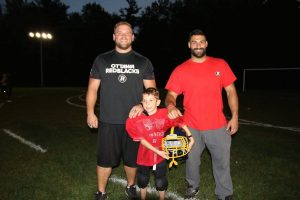 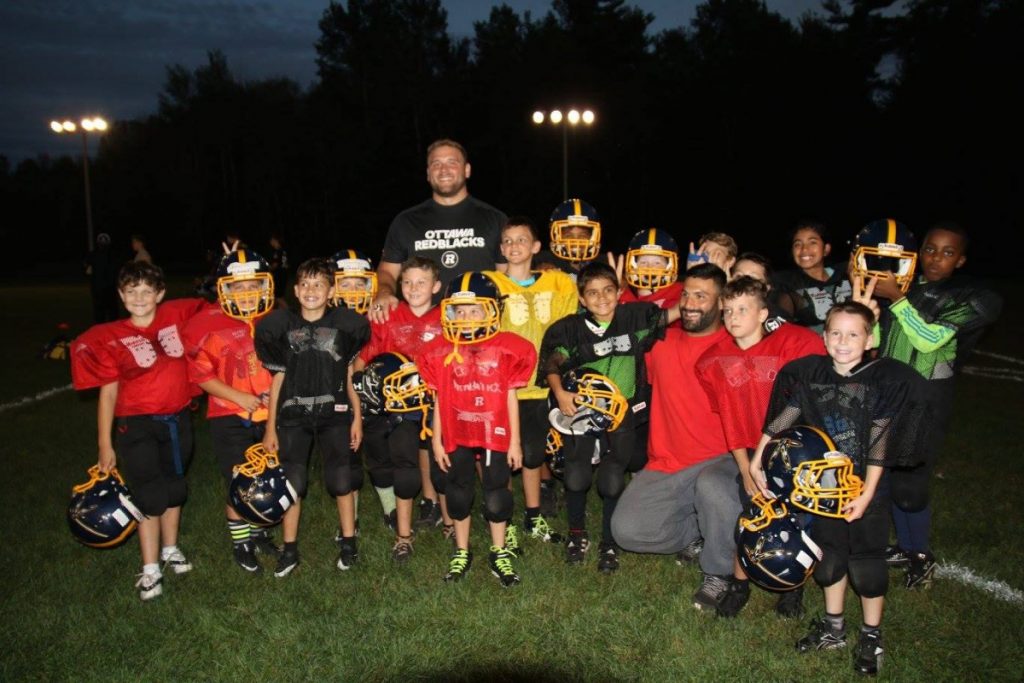 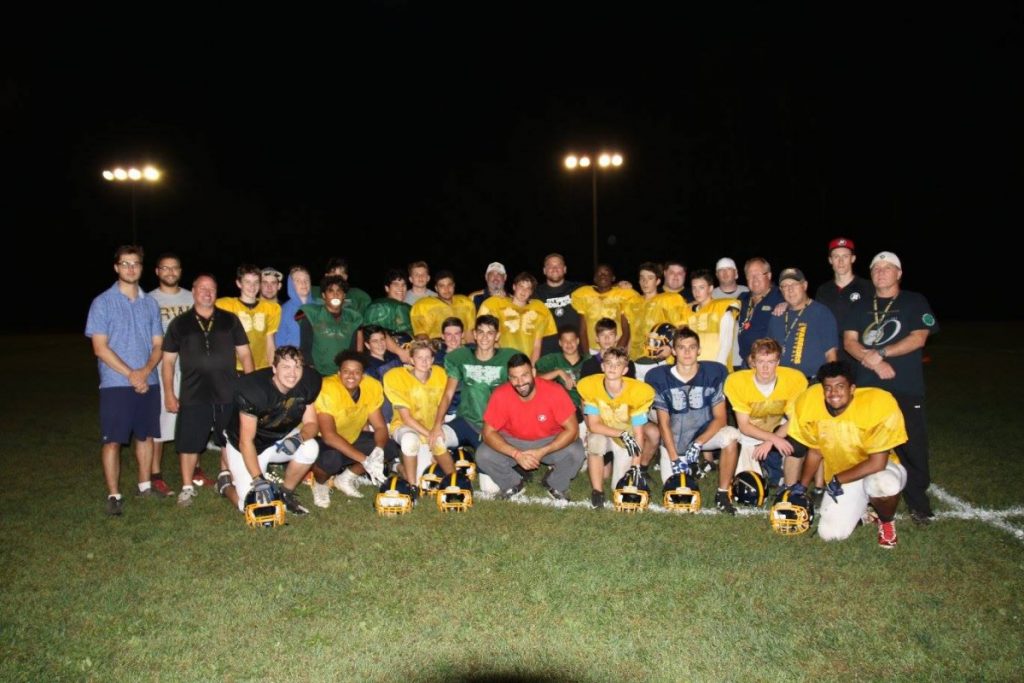 The Bell Warriors are going to see the Ti-Cats take on our REDBLACKS at a very special price of only $35 – a savings of over 30% off of the ticket price!!!! This is also a MAJOR FUNDRAISER for the Warriors….and the first 45 players will be able to take part in the Pre-Game On-Field REDBLACKS Warm Up Experience!!  Your team manager will have more details. 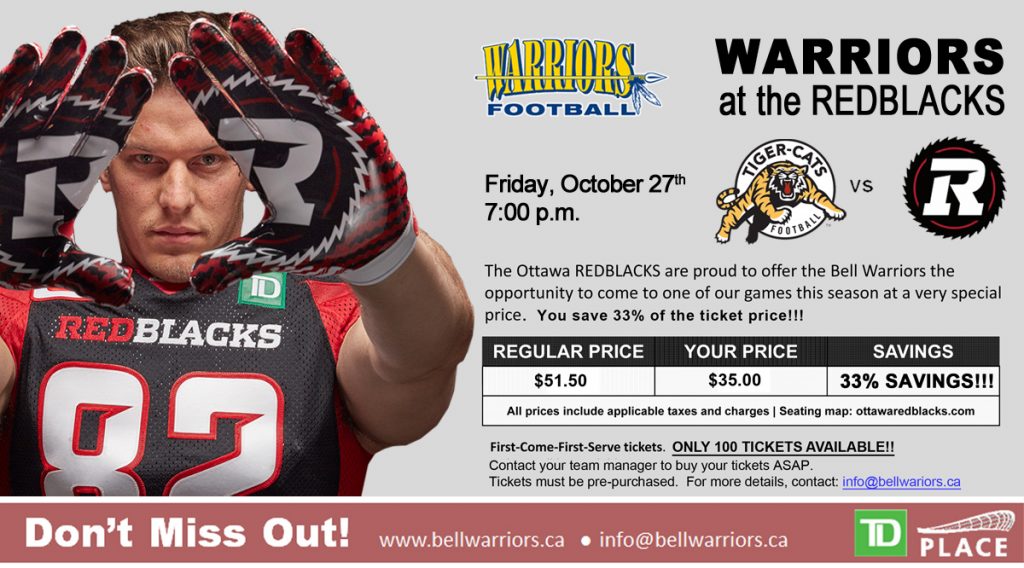 Details:
You can also contact your Warriors Team Manager to reserve & pay for your tickets with Cash, Visa or Debit but NO cheques.   Tickets sold on a FIRST-COME-FIRST-SERVE basis.  Email info@bellwarriors.ca if you have any questions.  For players who are part of the limited-access Pre-Game On-Field REDBLACKS Warm Up Experience, you are asked to meet at the top of the stairs at Gate 4 inside the stadium after you have scanned your tickets 45 minutes before kickoff (6:15 p.m.).  You’ll be instructed their on the rules….and make sure to wear your Warriors Jersey! 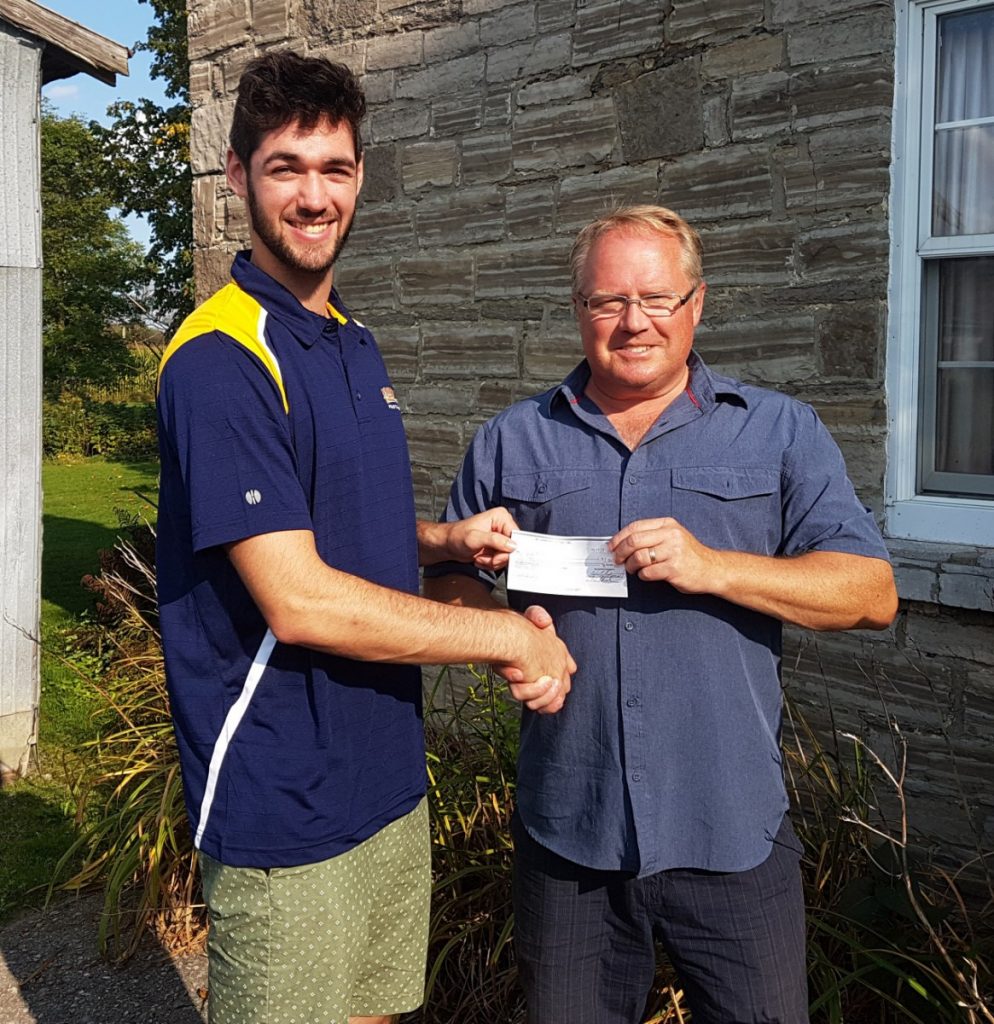 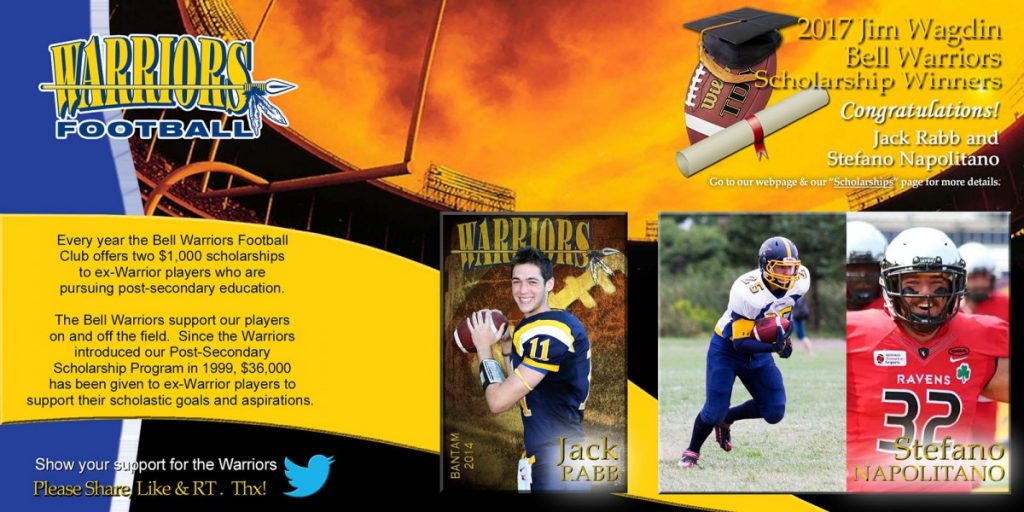 Many of you are familiar with Zack Statham-Souliere who played for us from tyke through bantam playing his last year with the Warriors in 2015.  His mother and father Karin Statham and Guy Souliere were huge contributors to our world-famous canteen for years.  Uncle Scotty has coached multiple levels for years.  His son Logan (Zack’s 1st cousin) played as well all the way through our program and still helps out with our bantams.  Scotty’s wife was a team manager and an unreal volunteer while her and Scotty’s daugther Makayla was our inaugural Volunteer of the Year!

The Warriors just learned recently that Zack is in a battle with leukemia and started the chemotherapy the day after he found out.  Warriors are all about supporting our players on and off the field.  We will be combining a fundraiser with our Warriors Annual Homecoming Day this year October 15.  More details will follow.   We also want to bring your attention to a Go Fund Me account that has been opened up to help the Zack and his family with costs that will surely be incurred while he fights his battle.  Click on this link to show your support for Zack and his family:  #ZackStrong Leukemia Fight

Thanks for showing you care! 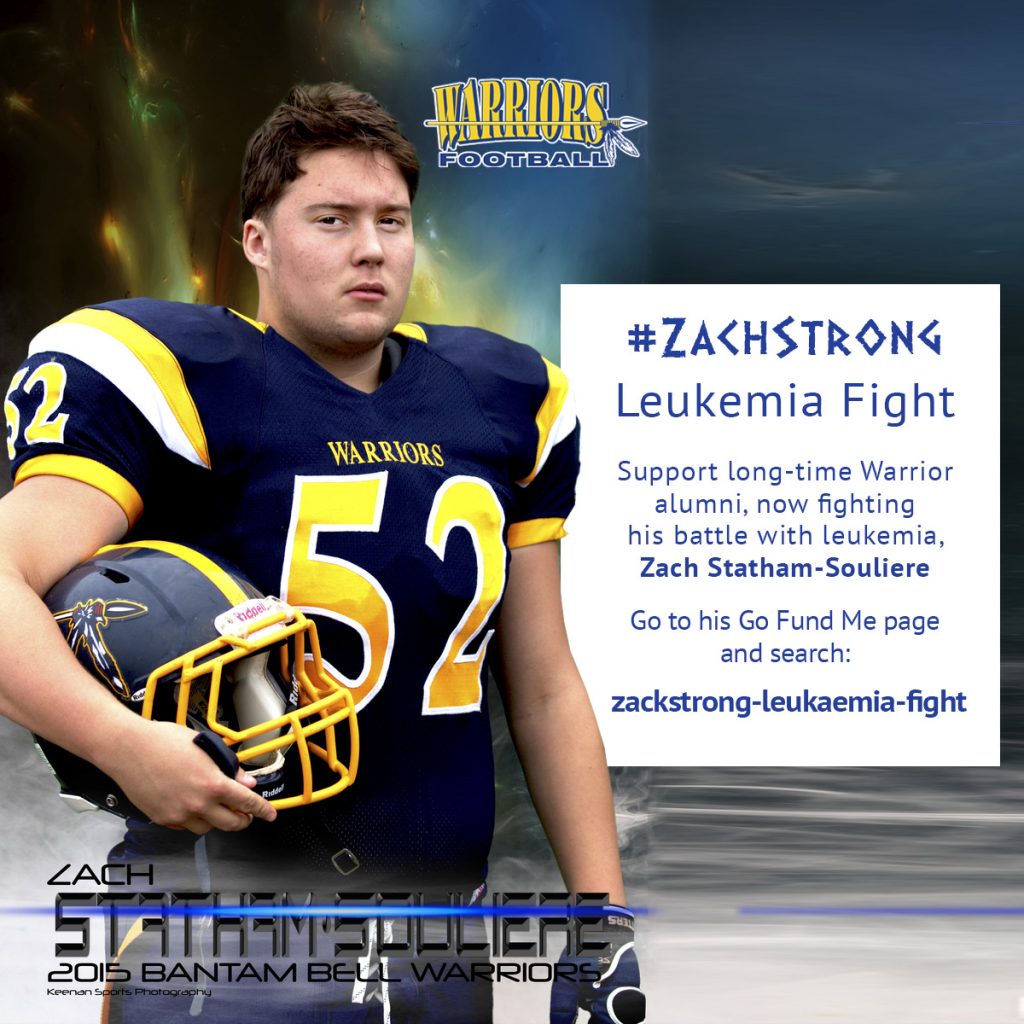