We have to say THANK YOU to our close friend, Bell Warriors Alumni, Jesse Card who has just made a donation to become a Friend of the Warriors Sponsor!  Jesse is the current Acting Executive Director of Youth Ottawa.

“Keeping our sport ACCESSIBLE FOR All is of the utmost importance with the Warriors. Not every family can afford to register their child in a competitive sport.  We do our best to keep our fees as low as possible but we can’t do that without the support of our community.  Jesse is all heart and he appreciates the challenges the Warriors face and he continues to give back to show his support.  He’s a gem of a man”, states Warriors President Paul Stewart

Jesse had quite a distinguished football career which started in 1994 as a young Tyke with our Bell Warriors.  He won Rookie of the Year that year and he never turned back.  He went on to play for the Warriors winning Outstanding DB at Pee Wee, Bantam Rookie of the Year and finishing his Warriors career winning the coveted Coaches Choice Award.

He went on to play 5 more  seasons with the McMaster Marauders while earning an undergraduate degree in  Psychology with a great focus in the application of psychology in sport and organizational structures.  Jesse went on to  advance his studies  earning a Master’s degree in Criminology with a concentration in Crime Prevention. As a Marauder, Jesse’s accomplishments were notable winning 2X Most Improved Player and 3X 1st-Team OUA All-Star  honours,  He is still ranked #1 for Most Career Passes Intercepted (16) and #3 for Most Career Solo Tackles (with 99).  He was a Yates Cup winner and was named to the McMaster All-Decade Roster for the 2000’s!  His football career finally finished but not before it took him to play in Finland.

Jesse returned to Ottawa to start his career building a successful creative mulitmedia agency (House Edge Media).  He soon reintegrated himself into the local youth football community with his company HESN which produced player and league video and markteing tools and opportunities.  He joined our league, NCAFA, as a VP of Communications and Marketing and even found time to return to his roots joining the Warriors as a Bantam DB Coach. 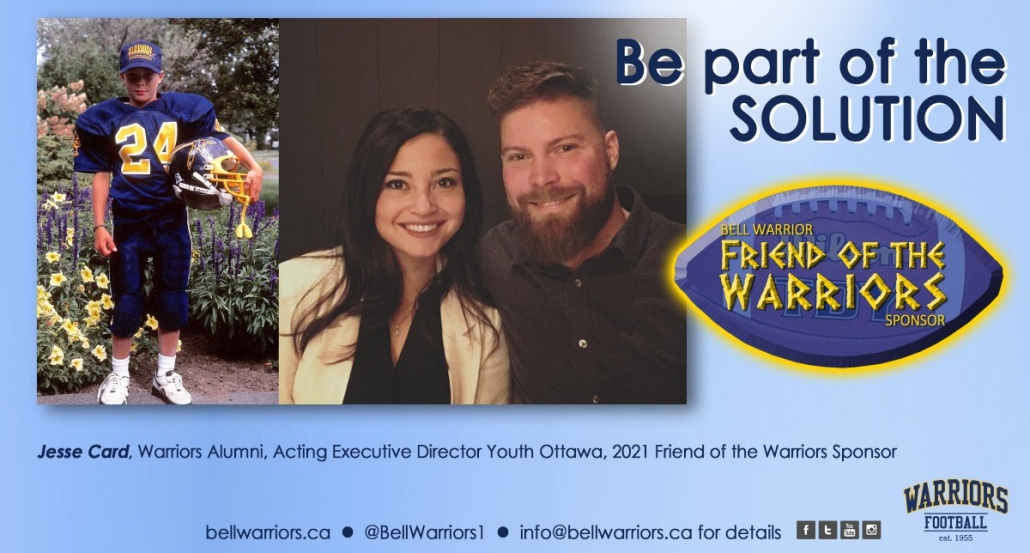 “I’ve gotten to know Jesse very well through my work with NCAFA and as a coach.  Jesse was part of my coaching staff.  He is a passionate young man especially when it comes to football and the values it promotes in our youth.  He gets it.  The fact that he continues to do what he can to give back says so much about his character and generous spirit.  On behalf of the Bell Warriors, I am proud to THANK JESSE CARD for becoming a valued Friend of the Warriors Sponsor.  You’re the best young man”, concludes President Stewart