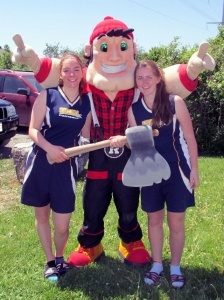 Preparation for the 2021 Girls’ Touch Football season is under way. There are 4 Divisions of competition.  Your age is as of December 31st of each year:

Generally, training starts in April while the regular season starts the first Friday after the long-weekend in May.  Games this year will be on Friday evenings and Sunday afternoons.  The championship weekend is on the last weekend of June.  Mosquito is a 4-on-4 game while the other divisions are 7-on-7.  This will all be dependent on government COVID-19 protocols but we are hopefule to run the season as planned.

April is an important developmental time for Mosquito and Peewee players. Players will be given the opportunity of 3 sessions per week and players are expected to attend at least 2 of them.  Bantam and Midget teams will have an early April meeting to determine practice plans for the season.

Please register for Tyke, Mosquito, Peewee, Bantam and Midget programs by emailing rodmoors12@gmail.com.  In the email, please provide the following information: player name, dob, address, and phone number.  One can also register and pay on-line on our Registration page.

The Warriors program need coaches and assistant coaches every year to run our teams properly. Training and in season support will be provided. Please consider helping out. Bantam and Midget players are also welcome as assistant coaches at the U15 and U13 level. Community hours can be awarded for this involvement.

Rodney Moors is our non-contact Director of the Bell Warriors Football Club and the non-contact Director in NCAFA. Rodney started playing football with the Queensway Titans. He was cut from the first team he tried out for. His first team was Myer’s Riders (Bantam). He then played for the Sir Robert Borden Bengals (3 years), the University of Toronto Varsity Blues (6 years), Modena Vipers (Italy, 1 year), Gateshead Senators (England, 2 years) and the Ottawa Bootleggers (2 years). As Rodney began his teaching career in Aurora, he began playing touch football with Landell Lightning. Landell won 3 National Championships (1994, 1996, 1998) and Rodney was twice Nike Player of the Year. He then moved to Ottawa to marry Joy and start a family. He joined the Ottawa Nepean Canadians touch football team and won 5 National Championships (2002 -2006) with the Canadians. At present Rod plays with the Ottawa Capitals and in 2010 and 2012 were National Championship semi-finalists.Rod began his coaching career in Aurora with Dr. G.W. Williams Wildcats (senior football, 5 years), then coached junior and senior football teams at Bell High School and Colonely By Secondary School. In 2003 he started girls touch football at Bell High School. Rod began coaching women’s football in 1996 with the Ottawa Devils and helped them win two National Championships (1997, 1999). Recently Rod worked with the Ottawa Devils again and helped them win 3 National Championships (2007, 2008, 2010).

Please contact Rodney.Moors@ocdsb.ca for more information about our Girl’s Touch Football Programs or if you wish to volunteer as a coach.