Distinguished Warriors alumni Sam Sabourin, who was an All-Canadian playing for the Queens Gaels, has launched a special training plan for Bell Warriors athletes. Based out of Stittsville, Sam is the owner of Between the Bumpers. Go to this link for more details:  http://tiny.cc/ob0usz

Prior to Sam starring with Queens Gaels, Sam was the a multi-major award winner with the Warriors starting with Best OL at Tyke, MVP Tyke, Best Defensive Player Mosquito, MVP Mosquito, Coaches Choice Pee Wee, Coaches Choice Bantam and finally MVP at Bantam.  Sam was also a two-time winner of the Jim Wagdin Bell Warriors Scholarship.  His playing days at Queens were just as impressive seeing him win the 2010-11 OUA Rookie of the Year, CIS Defensive player of the week, OUA Defensive player of the week twice, set school record for solo tackles in a season with 50 (2nd most in CIS), and set a school single game record for solo tackles in a game with 13 vs. McMaster.

Sam would have been a top 10 CFL Canadian draft pick but chose to move on to the business world.  Sam has been described as the best football player never to play pro, after declaring himself ineligible for the CFL draft.  He has worked as a Strength and Conditioning Coach, and lectured at multiple universities, early in his career, and is now doing some great things for competitive athletes and regular people alike! 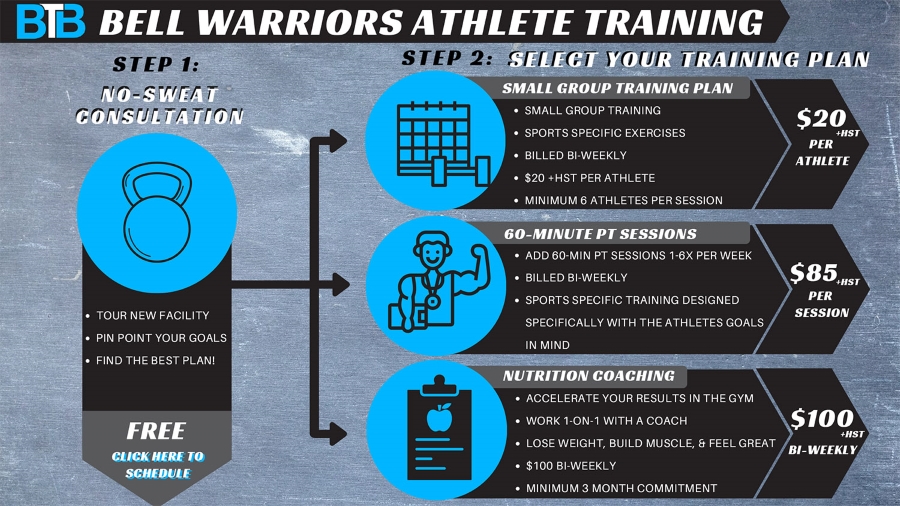 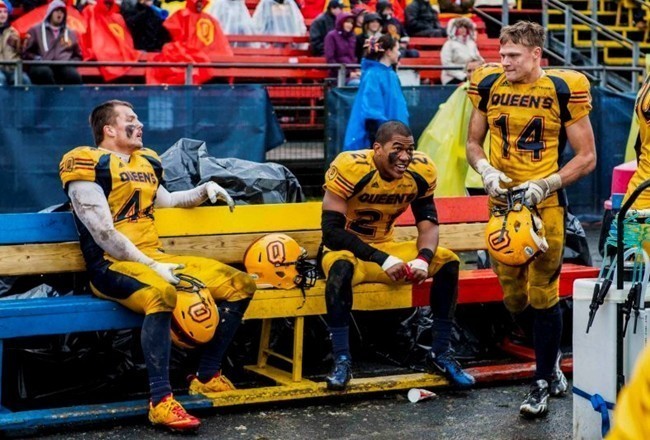 THANKS SAM FOR REMEMBERING YOUR ROOTS AND STEPPING UP TO SUPPORT OUR WARRIORS!

It’s official!  The 2019 Jim Wagdin Bell Warriors Scholarship winners have been announced and this year’s winners are Ethan Ryan  of Carleton Place and Daniel Briere of Ottawa.

Ethan Ryan describes some highlights from his many years with the Warriors as, “The skills and life lessons I learned from the Bell Warriors football club were invaluable and contributed to my overall personal growth in becoming a man. Each year a different coach brought new direction and advice on how to be the best team member possible but overall the messages were always the same.  I was taught to value teammates, to give of myself, because someone was depending on me. I was taught to have compassion for my team mates and the opposing teams. I learned to be committed to myself and to my team. These lessons forced me to become responsible. Playing with the Bell Warriors required dedication and I learned to give respect and was given my fair share.  I was an award winner with the Bell Warriors every year I played for them. The Bell Warriors made me the football player and person that I am today.”  Ethan will be at Carleton University this year studying music and is hopeful to play football with the Carleton Ravens when USports returns.  He closed his application with the pledge to, “strive to make the Bell Warriors proud of me.”

Daniel Briere says of his days with the Warriors, “The Bell Warriors taught me what hard work was from a very young age. I was around 11 when I started my first year with the Warriors and it was an experience like no other.  The Bell Warriors football organization gave me the opportunity to create bonds that will last a lifetime and help me create a work ethic that I feel will keep with me until the day I retire from whatever is awaiting me in the future.”  Like all of our successful scholarship winners, Daniel has a proud record of volunteering in our community.  He was a active organizer of his high school’s Relay for Life which raises badly needed monies for the Canadian Cancer Society.  Daniel also was a “Buddy” for Ausome.  Ausome is an organization that gives children with autism a space to engage in physical activity.   Daniel ovserves that, “Being brought up with the Bell Warriors and learning about teamwork has helped me to be successful with these events in my community.”

Join us in congratulating these two exceptional young men who continue to represent the “Warrior Way” and our program with integrity and pride.  CONGRATULATIONS ETHAN AND DANIEL! 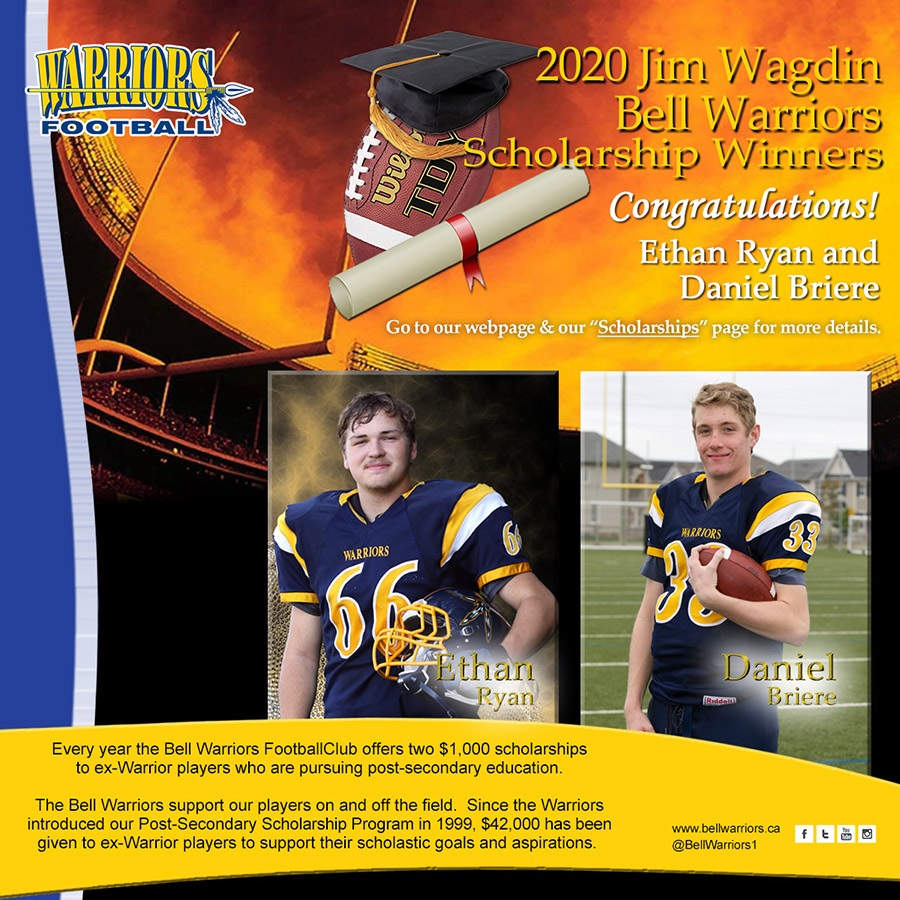 A special thanks also goes out to KEVIN PIDGEON, President and CEO of the Nautical Lands Group who was our exclusive GOLD SPONSOR of this year’s two Jim Wagdin Scholarships (READ MORE). 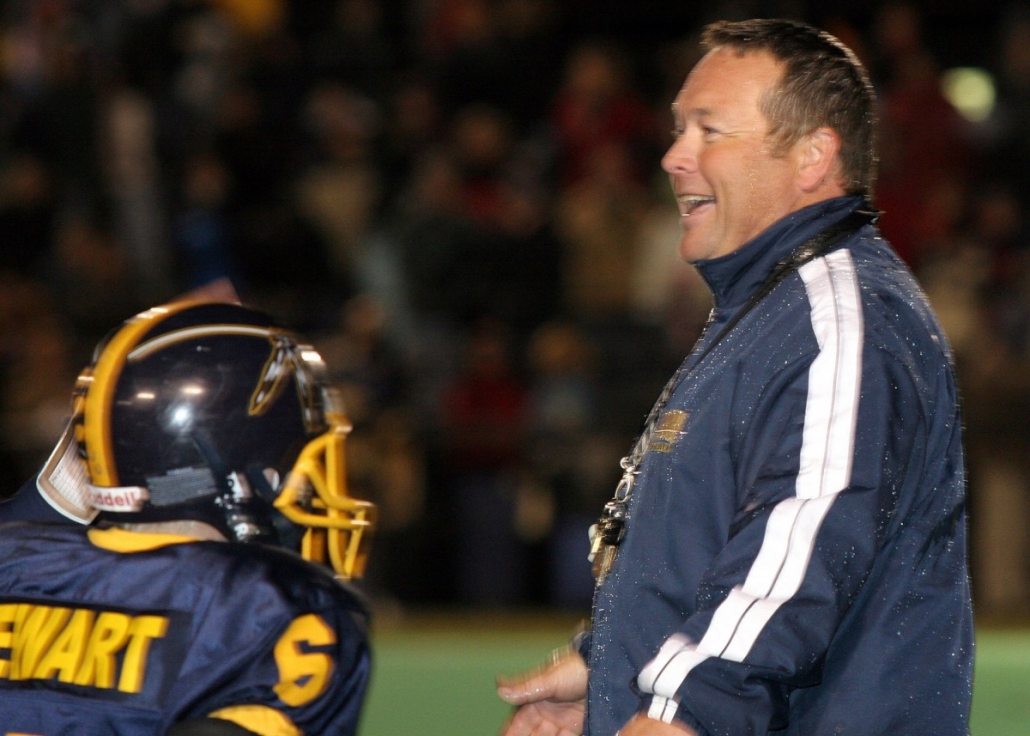 Kevin Pidgeon – THANKS KEV for continuing to care!!!