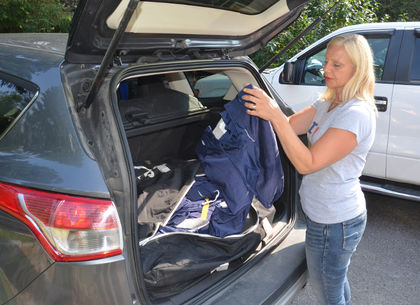 The game pants are valued at about $1500 to the Bell Warriors Football club.  For the 15 and 16-year-old players , it means they’ll have to play like a team despite the fact they won’t look like one.   They will be wearing old practice pants until the replacement pants arrive.

Team manager Veronica Papalia was shocked to discover the equipment bags open in her car Friday morning and one bag missing.  ‘This is what we are talking about,’ says Papalia, as she holds up a medium-sized pair of pants, ‘game pants; roughly 30 pairs of large to 3XL pants were taken.’   While the jerseys were messed up, the bag they were in was too heavy to carry. Papalia figures thieves made off with what they could after breaking into another car across the street.

‘It’s just devastating that a club that works so hard based on donations and volunteers has to endure this loss to start our season off,’ says Papalia.  The Bell Warriors are a Bantam level team, a competitive football league in an area with many low-income households.  The loss is tough, especially with their first game this Friday.  Jake Papalia is 13 years old and plays at the Pee Wee level with the Warriors,  ‘I don’t know what a person like that would want with football pants,’ he says, ‘and the coaches just preach playing like a team and now they won’t look like a team when they’re playing on Friday.’   (credit to Joanne Schnurr, CTV Ottawa for the story)