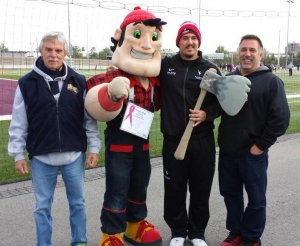 In 1999, the Bell Warriors initiated the Warrior Scholarship program offering two $1,000 scholarships to ex-Warriors who are pursuing post-secondary education. Participation in a post-secondary football program is not a prerequisite. There are however, three selection criteria – Academics, Warrior Experience, and Community Involvement.

Applications must be submitted by September 1 and must include an original letter describing both the applicant’s experiences with the Warriors as well as his/her volunteer involvement with the community, a transcript of the applicant’s previous year’s marks, a notice of acceptance from the selected university/college (for first year students) OR a note from the school indicating the applicant’s return for a succeeding year, as well as any letters of reference. An independent committee, as chosen by the Club executive, makes the selections. $40,000 has been rewarded to date to Warrior alumni for their pursuit of post-secondary education. The Warriors support our players on and off the field!

Jim Wagdin volunteered for the Bell Warriors for 24 amazing years as a coach, VP and eventual President of the Club until 2011.  Mr. Wagdin was a man of character, dignity and distinction who set a tremendous example for our young players and families.  In 2011, upon his retirement from the Warriors, Jim was bestowed the honour as the Bell Warriors 1st Inductee into the Bell Warriors Hall of Fame.

The Bell Warriors will have a selection committee which selects our club’s successful player submission to NCAFA.  Deadline Oct 1st.   NCAFA will award:

Each NCAFA bursary is in the amount of $500.00!  Each Club that has a Girls Touch Bantam, or tackle Bantam or Midget team shall submit the name of one player who illustrates:

This is just another of the many ways NCAFA adds value & gives back to our local football community.   BEST OF LUCK!