It’s official! The 2016 Jim Wagdin Bell Warriors Post Secondary Scholarship winners have been announced and this year’s winners are Kurtis Schaefer of Stittsville and Brad Cowan of Ashton.

Kurtis Schaefer credits his experience with the Warriors as “Playing for the Bell Warriors, I did not just win or lose games or have personal accomplishments. I learned valuable life lessons that I believe I would not have learned anywhere else in my life. With the Warriors, I learned how hard work pays off with the endless sprints at the end of practice for example.  I learned the quality of leadership by being put in the role as a team captain for the majority of my years as a Warrior.  I learned how to get along with 30+ random people (that I have never met before) and then bond together on the football field to eventually become a family while trying to do something great that season.  Lastly, I learned the value of respect.  I earned a huge sense of respect for my coaches who would dedicate a tremendous amount of time to come out to practices and games to help us get better.  The coaches taught, pushed and helped us grow from little boys into responsible young men.”

Kurtis has completed his 1st year of Queens University where he dressed and played for the Gaels as a true freshman.  He’s now a 2nd year Gael and he has quickly become an integral player for the Queens club.  In addition to his support with our Warriors programs as a mentor over the years, Kurtis has been very active with Queen’s Motion Ball program and more recently, the Gaels Care program.  This program saw Varsity athletes from all of the Queen’s teams go into local schools to work with children with  special needs or at-risk children.   Most recently Kurtis was involved with a program that one of my teammates started called CESAP.  CESAP is a program designed to inform youth about concussion prevention and education.  Kurtis’ role in this program was to help run clinics locally for school and football programs in Kingston.  What a great role model for our Warriors’ program. CONGRATS KURTIS!

This is how Brad Cowan described his time with the Warriors, “As I look back, being able to say I am a “Warrior for Life” is something that I am extremely proud of.  The Bell Warriors taught me the importance of team work, commitment and putting the best interests of the team ahead of my own.  It meant showing up to every practice, giving it my best effort and trusting the process.  Trusting my coaches, team mates and everyone involved who helped us to be successful.  As I start my next steps in football with the Laurier Golden Hawks, I can take with me the things I learned from the Bell Warriors such as a strong work ethic and being a good team mate and know that these qualities will carry me forward.  It is these qualities I don’t take for granted.  I hope to have many more positive experiences at Laurier over the next four years.”

Brad has been involved as a volunteer at the Ottawa Food Bank through the TELUS Day of Giving.  He was a volunteer at South Carleton High School to speak to graduating students his former Middle School (Goulbourn Middle School) on the experiences of transitioning from Goulbourn to South Carleton High School.  Additionally, Brad participated in the Link Crew program at South Carleton providing orientation to Grade 9 students.  He assisted in coaching young hockey players in Initiation Level with the Stittsville Minor Hockey Association and Brad has been a volunteer at the Scott Tokessy (Baseball) Tournament that helps to raise money for CHEO.  Brad makes a very worthy winner of this year’s Jim Wagdin Bell Warriors Post-Secondary Scholarship.  CONGRATS BRAD! 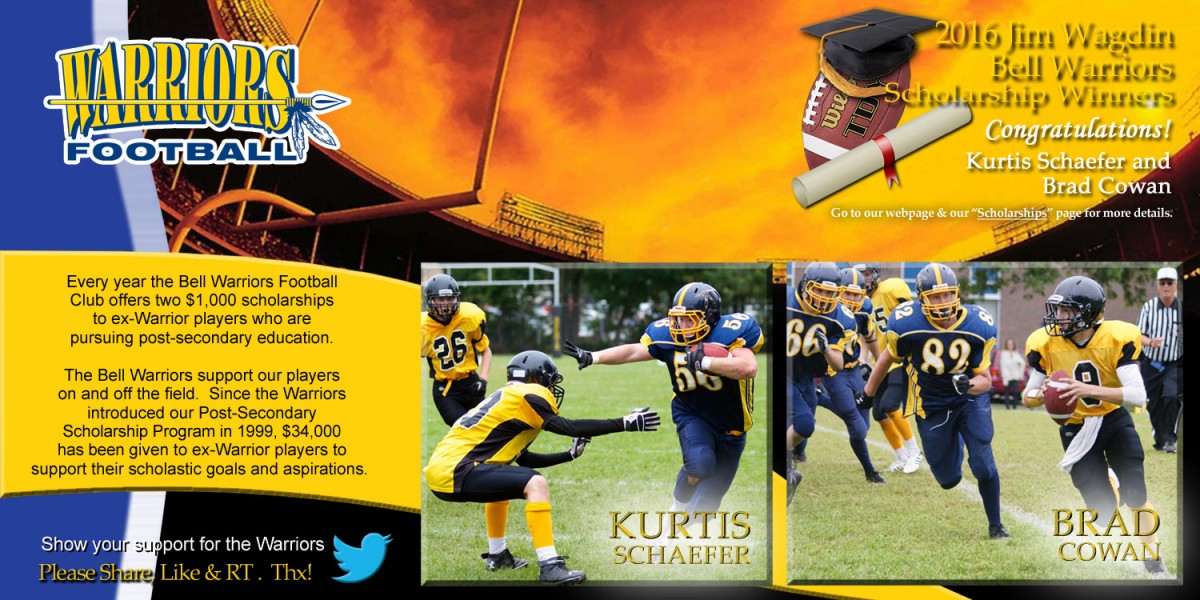